Inside Israel
Violent clashes in Southern Israel. A policeman and a Bedouin Israeli were killed during clashes in the Bedouin village of Umm al-Hiran, sparked by the demolition of homes in that Negev village. Police say the Bedouin rammed car into officers, but locals say the driver lost control after being shot by police. This statement from Israeli Ministry of Foreign Affairs presents a background on the events in this Bedouin village.

New IDF report on Palestinian terror in West Bank. In the 15 months between October 2015 and the end of 2016, there were 281 terrorist attacks originating in the West Bank, including 143 stabbing attacks, 89 shooting attacks, 39 vehicular attacks and 9 attacks utilizing explosive devices. 81% of the stabbing attacks were directed at IDF forces.

Knesset inaugurates Jewish-Muslim ties caucus. Members of Knesset from across the political spectrum gathered in the Knesset to inaugurate the Jewish-Muslim Ties Caucus, alongside religious leaders from both faiths. “We are now at a period in which hatred, alienation, stereotypes and prejudice are the dominant voice in our lives. I see this dialog as a ray of hope that could revive the faith of coexistence in our shared land”, one of the organizers of the meeting said.

Trump tells Jewish son-in-law, ‘If you can’t make Mideast peace, nobody can’. Jared Kushner, who is married to Trump’s daughter Ivanka, was appointed earlier this month to be a senior White House advisor for the Trump administration. “All my life I’ve been hearing that’s the toughest deal in the world to make,” Trump said. “And I’ve seen it, but I have a feeling that Jared is going to do a great job.”

US sent $221 million to Palestinians in Obama’s last hours. Officials say the Obama administration in its waning hours defied Republican opposition and quietly released $221 million to the Palestinian Authority that GOP members of Congress had been blocking.

Message from Prime Minister Netanyahu to the Iranian People. In anticipation of his coming meeting with President Trump, Netanyahu issued a message to the Iranian people. Among other things, he said: “We are your friend, not your enemy. We’ve always distinguished between the Iranian people and the Iranian regime. Our two peoples can work together for a more peaceful and hopeful future for both of us.”

Israel no longer in top five issues influencing American Jewish voters. According to a new study released by The Ruderman Family Foundation, while the bond between American Jews and Israel remains strong, the “ties are fraying.” “The American Jewish community and Israeli society exist in very different realities and these differences have been shaping the worldviews of these two communities.”

Culture and Lifestyle
The 8th best place to visit.  According to America’s first fashion magazine, Harper’s Bazaar, Israel should be number eight on your list as a vacation destination. The magazine states, “Don’t be fooled; its vibrant culture, phenomenal food scene, historic landmarks, beaches and endlessly impressive hotels are too much of a draw to ignore.”

Hebrew Language Day. Israel marks Hebrew Language Day every year on the birthday of Eliezer Ben Yehuda, the father of modern spoken Hebrew. This year, the Hebrew date fell on January 19th.  The revival of the 3000-year-old language is unique, becoming a spoken language after being dormant for centuries.

8 fabulous art hotels in Israel. Art hotels are usually dedicated to a certain kind of experience for guests interested in culture. Waking up beside a masterpiece or alongside an installation can give you a creative jolt to start your day. So, if you daydream about living with art or having a private museum (even if only for a few days), be sure to book a room at one of these 8 art hotels in Israel.

Science and Technology
Israel secures top-10 ranking in 2017 Bloomberg Innovation Index. Moving up one spot from last year, Israel has been named the 10th most innovative economy in the world in the 2017 Bloomberg Innovation Index. The index, according to Bloomberg, ranks economies annually by analyzing seven contributing factors such as research and development spending and the concentration of public hi-tech companies in each country.

Israeli company performs first transplant of lab-grown bones. An Israeli biomedical company announced that it has for the first time successfully transplanted artificially grown human bone into a group of patients suffering from bone loss.

Government approves NIS 250M plan to promote smart transportation. In a bid to innovate Israel’s roads, the government approved a National Plan for Smart Transportation. Among the key elements of the program will be field trials of autonomous vehicle technologies, as well as creation of a research center together with the Council for Higher Education.

At the heart of Israel’s high-tech ecosystem. It is difficult to put your finger on the secret responsible for the success of Israeli high-tech. The mix in the Israeli economy’s growth engine contains creativity, audacity, and innovation. Another elusive and unquantifiable element is the ecosystem – a broad network of connections between entrepreneurs, investors, and representatives of international corporations.

In Depth
Palestinian Authority Educational System. A report prepared by an Israeli organization Impact-SE revisits the Palestinian Authority school curriculum. While the curriculum does not directly call for students to take up arms and attack Israelis, it instills an atmosphere of endless war and dedication to violence. Thus, it does not meet UNESCO Standards for peace and tolerance. The full text of the report can be found here. 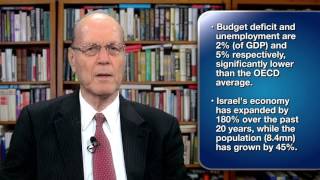 Israel’s Economy – An Island Of Stability